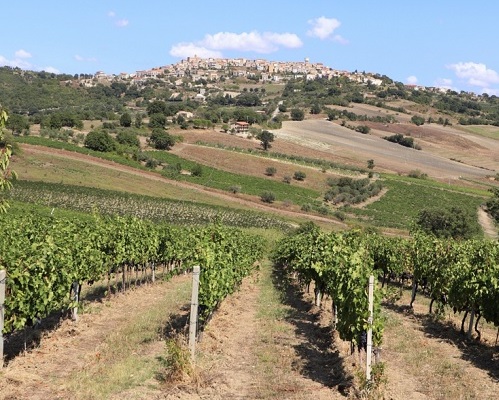 Molise's wines are produced in the 6400 hectares of vineyards of this small region, where hills and mountains are equal in extension and vineyards are half in hills and half in mountains. Vineyard area of Molise is mainly distributed in the province of Campobasso, for an annual production of about 350,000 hectoliters. The mountainous part, which develops between the Abruzzi and Samnite Appennines, gives a semi-continental climate, with hot summers and cold and snowy winters. Along the coast the climate is milder, with modest thermal excursions and scarce precipitations.

The areas of reference for the cultivation of vine are two: the first, more extensive, is located along the valley of the river Trigno (on the border with Abruzzo) and the valley of Biferno; the second is located around Isernia. Vines of Molise are greatly influenced by the neighboring regions such as Campania, Apulia, but above all Abruzzo, to which the territory of Molise belonged until 1963.

Black berried grapes are more common, among which there is the autochthonous Tintilia with wines having the appellation Tintilia del Molise DOC. Other grapes are typical of the neighboring territories, such as Montepulciano and Aglianico which are the most important black berried grapes, whereas Falanghina, Trebbiano (both Tuscan and Abruzzese), Greco, Bombino bianco and Malvasia are the most important white berried grapes. Sangiovese is used alone or in blend with Montepulciano for the production of Pentro DOC Rosso wine. Among international grapes there are Chardonnay, Cabernet Sauvignon, Merlot and Syrah. Molise does not include any DOCG, but 4 DOC and 2 IGT appellations of origin. DOCs are: Biferno DOC in the province of Campobasso, Pentro d'Isernia DOC in the province of Isernia, Molise DOC which covers most of the territory of Molise and finally Tintilia del Molise DOC, which includes several municipalities of lower Molise. 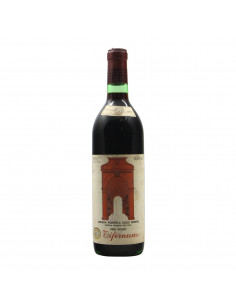 AZIENDA AGRICOLA COLLE SERENO
TRS75
€30.00
Personalizzami
Do you know what a vintage wine really is?Vintage wine is not to be considered as a product to be tasted, but as an emotion to give that brings with it the memories of a past time.It is first and foremost a collector's work, with high antiques value and only later, if you are lucky, a wine to taste.